At least 44 people have been killed in a crush at a crowded religious festival in the north-east of Israel. Dozens more were injured at the Lag B’Omer celebration, which takes place annually at the foot of Mount Meron.

The country’s successful vaccination programme has allowed it to lift many restrictions, but health officials had still warned of the risk of Covid-19.

Crowding is a phenomena when large number of people gather in a given area. In case of mass gathering (events, festivals, and religious places) people often gather in greater density, which poses a great challenge on infrastructural capacity. This extreme high density may result in crowd disaster. There are mainly three reasons for stampede to occur at a particular place: competitive advantage, safety, and system failure 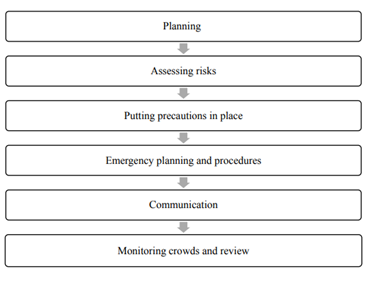 In view of the recurring stampedes at places of mass gathering, including religious places, and typically ad-hoc responses to those, the National Disaster Management Authority (NDMA) had prepared ‘Suggestive Framework for Preparation of Crowd Management Plan for Events/Venues of Mass Gathering’.

The major recommendations include:

Example of major stamped in India:

The way for preventing overcrowding may be cheap tickets in off peak hours, entertainment before and after an event. Establishing venue capacity may help in avoiding the risk of disaster at first place. An overview of pedestrian simulation is presented which can help in developing evacuation strategies for safer events. Future work includes presenting a case study which shows how these strategies help for safer events and developing a simulation model for effective evacuation process in case of emergency. This work may also be extended to find the expected permissible waiting time for entry and exit.

How can one avoid a stampede? How to deal in that situation, what are the steps that is needed to manage stampede? (250 words)