Recently a report released by the Stockholm International Peace Research Institute (SIPRI) highlighted that India’s arms imports fell 33% between 2011-15 and 2016-20. 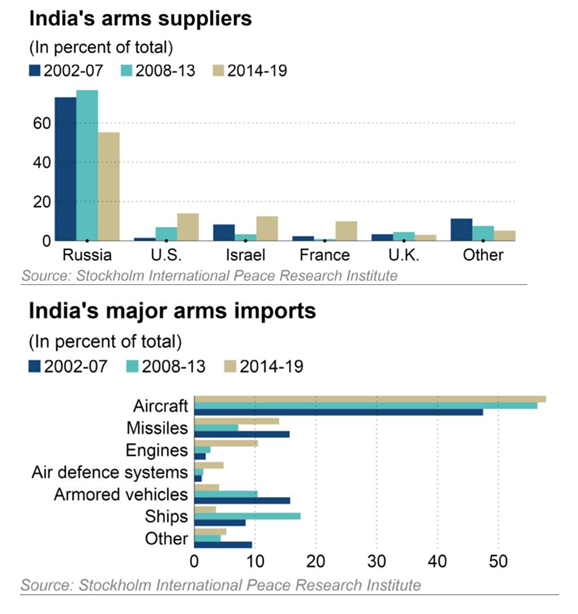 There are following factors that seems to appear in reducing India’s arms imports:

Can we really afford the declining trend of arms imports?

The declining trend of arms import may look good for optimists. However, when connected with ground realities, it may be cautious from a national security perspective. The reasons are:

Challenges in indigenisation of defence manufacturing:

The only way out of high defence imports and national security imperatives is -rapid indignation of defence manufacturing. Indigenisation is the capability of developing and producing any defence equipment within the country for the dual purpose of achieving self reliance and reducing the burden of imports.

It has been facing following challenges in India:

While hyper nationalism may prompt one to suggest a total curb on imports of arms and ammunition and prepare manufacturing them within the country, one needs to understand that defence manufacturing is a capital and technology intensive industry. It will take time to establish a sound and economically viable domestic defence manufacturing sector. The best way out in the current situation would be to balance between the imports and domestic purchase. International co-operation in joint production offers best choices in this regard. For eg: The production of BrahMos Missiles is a glaring example of this phenomenon. India should also encourage entrepreneurship in the defence manufacturing sector to reap its human resources. The government needs to come out with a long-term but systematic strategic plan to address the challenges which are affecting the growth of domestic manufacturing units.