Recently, the UNESCO World Heritage Committee has suggested that the Australia’s Great Barrier Reef should be put to a list of “in danger” World Heritage Sites.

What is the reason behind this move?

What is the Great Barrier Reef? 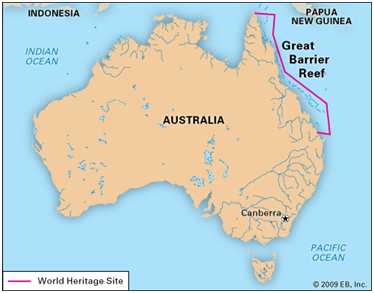 Risks and threats to coral reefs:

What are “in danger” World Heritage Sites?

Highlights of the UN Committee’s report:

Great barrier reefs support a wide range of species and maintain the quality of the coastal biosphere. Corals control the level of carbon dioxide in the water by converting it into a limestone shell. If this process does not take place, the amount of carbon dioxide in the ocean water would increase significantly and affect ecological niches. It is high time to keep them safe and protected to maintain the ecosystem and ecological balance.

What is the significance of the Great Barrier Reef? Why do they need to be protected? (200 words)