What is Ozone depletion? 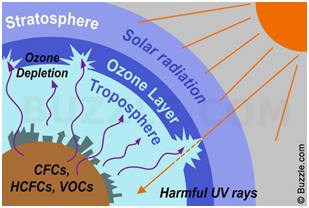 Ozone depletion gets worse when the stratosphere (where the ozone layer is), becomes colder. Because global warming traps heat in the troposphere, less heat reaches the stratosphere which will make it colder.In other words, global warming can make ozone depletion much worse right when it is supposed to begin its recovery during the next century. Maintain programs to ensure that ozone-depleting substances are not released and ongoing vigilance is required to this effect. In fact, global warming, acid rain, ozone layer depletion, and ground-level ozone pollution all pose a serious threat to the quality of life on Earth. They are separate problems, but, as has been seen, there are links between each. The use of CFCs not only destroys the ozone layer but also leads to global warming

“Nature is India is not only have scientific values but also has scared beliefs but still nature is now taken for granted”. How far this statement is correct? Explain. (250 words)