Change in water environment is one of the serious concern, it is often heard in news about the various problem occurring in water bodies

The term ‘Eutrophication’ is derived from the Greek word ‘eutrophos’ which means nourished or enriched. In context with the environment, the Eutrophication can be defined as the addition of artificial or non-artificial substances such as nitrates andphosphate, through fertilizers or sewage, to a fresh water system. It leads to increase in the primary productivity of the water body or ‘bloom’ of phytoplankton 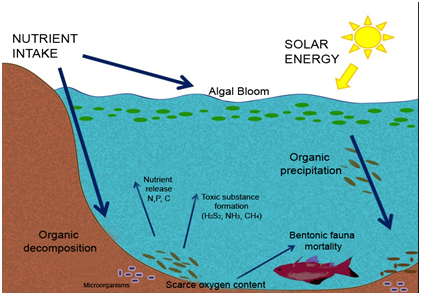 According to the Survey of the State of the World’s Lakes, eutrophication affects: 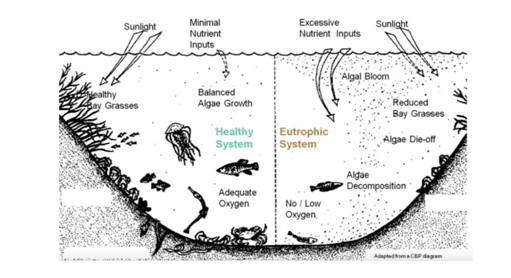 Water is not a commercial product like any other but rather a heritage which must be defended and protected, especially in the presence of a global decline in the availability of drinking water and increase in its demand. Despite the considerable efforts made to improve the water quality by limiting nutrient enrichment, cultural eutrophication and the resulting algal blooms continue to be the main cause of water pollution. The prevention and protection action that countries must adopt to safeguard the quality of surface water as requested not only by the scientific community and other experts, but to an increasing extent also by citizens and environmental organizations, is therefore increasingly important.

Improper waste management is one of the reason for excess of deposition in water bodies which disturb the water ecosystem and hence ecological balance. Explain. (200 words)