Greater Tipraland’ is essentially an extension of the ruling tribal partner Indigenous Peoples Front of Tripura – IPFT’s demand of Tipraland, which sought a separate state for tribals of Tripura.

Seventeen months after he resigned as the Congress state president, Tripura royal scion Pradyot Kishore Manikya has recently announced his new political demand of ‘Greater Tipraland’, which he claims would serve the interest of tribals, non-tribals, Tripuri tribals staying outside Tripura, even those outside India in Bandarban, Chittagong, Khagrachariand other border adjacent areas in Bangladesh.

Demand of separate state in India:

Several States in Demand for Creation:

Some of the states that are under demand for creation are: 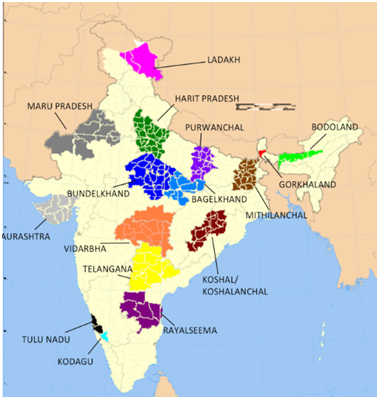 Basis of Formation of New States:

Advantages and Disadvantages of Creation of New States:

Larger States also pose several challenges. Notwithstanding the fact that the UPA has been reduced to a minority, they are surviving just on the support of two mutually antagonistic parties from a single State. Thus, with their brute Parliamentary strength, large States can determine not only the fate of Governments at the Centre but also influence policies. Smaller States including those in the North East are victims of neglect to a great extent due to their poor presence in the Parliament.

Even after so many year of independence the arrangement and settlement of interstate boundaries are income task. Comment. (250 words)